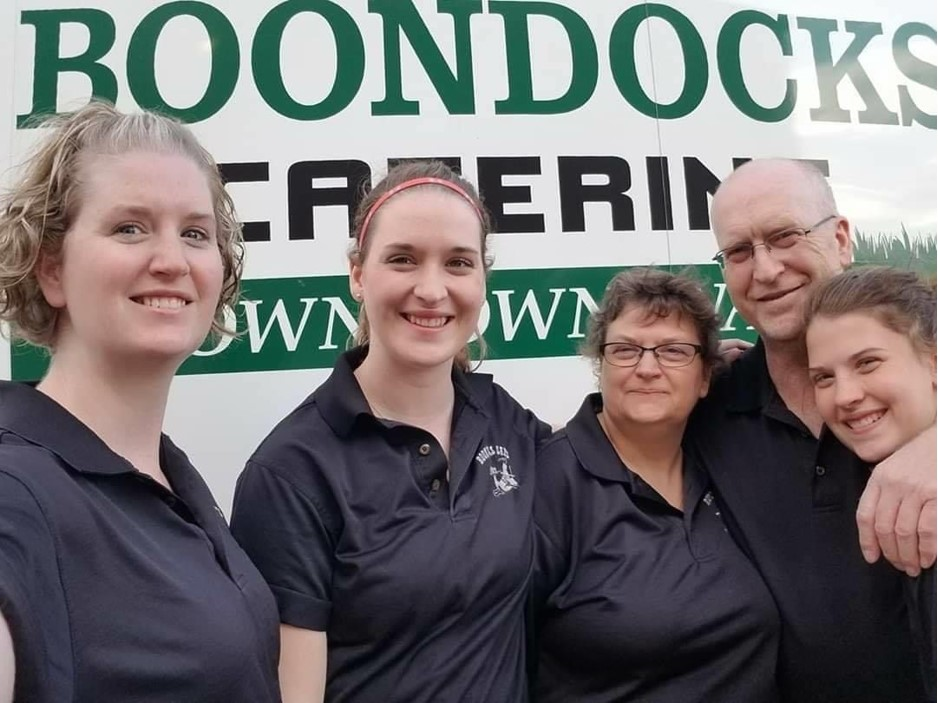 The Wadena Chamber of Commerce is proud to highlight the owners of The Boondocks Café, Dale and Michele Salge, located at 201 Jefferson St S., Wadena, MN.
The Boondocks has become a main street staple, the atmosphere is friendly and inviting. Their first restaurant opened in 1984, they moved to their second location in 1988, and have been in their current location since 1996. Catering started around year three or four and continues today. The café’s main dining room has large windows facing main street, a second dining area is smaller and has a large Boondocks sign above the room’s entrance. They received that sign as a gift from staff a few years ago. Their current staff, Laureen, Lynda, Ethel, Jane, Brad, Lori, Bev, Macey, Jessica, Tori, MacKenzie, and Brittany are spoke of with fondness by the couple. Michele shared how overwhelming they felt in the days following the 2010 tornado when they were asked to serve three meals a day to the National Guard and two meals a day to the lineman brought in to help. She stated that without the seasoned staff of the Boondocks they could not have completed those orders or remained open to also serve community members. The pandemic has brought its own challenges. Staffing was reduced to the two of them filling take-out orders, and since reopening seating is at 50% capacity and staffing schedules are not as they once were. “Changes over the years and especially right now could not and cannot happen without staff input”, the couple said.
‍
Michele and Dale are from Brooten, MN, where Dale left dairy farming and Michele a career in nursing. Hard work, long hours, and interacting with different personalities has helped them become who they are today. When asked if there was an “aha moment” to start a restaurant they both said “No”. Their one regret is that they did not make more family time with their five children Matthew, Brittany, Jessica, Jacob, and MacKenzie while they were growing up. All of whom, including their spouses, continue to help now when they can.

The reputation of Dale being the Grumpy Cook started at their first location. At that time, they had a small electric grill to make all their food on. Everyone knows that a crispy hash brown takes time and energy, and it took forever on that grill. Every time a hash brown order came in a look of dread came across his face. “The day did not come quick enough for a much larger more efficient grill”, he said. Thinking back to the beginning, Dale spoke of receiving help from “a couple of supply guys”. He said his lack of experience was best served by allowing himself to ask for help. They also spoke about the move from their second location to this location. Without any requests for help, a handful of their customers showed up and helped them move. Supporting local business is essential, the couple said.